Junior was born feral at the ballpark. After months of socialization, he’s ready for adoption, just in time for the Rockies’ 2022 home opener.

DENVER — For decades, feral cats have lived in Denver’s Ballpark District, but one cat born there is now embarking on a journey no Coors Field cat has gone on before – adoption.

No, not that cat – the fluffy gray one that raced onto the field during last year’s opening weekend on a night when the Rockies fell to the Dodgers.

This is Junior, who was born that same month, April 2021, as baseball returned to Coors Field amid the pandemic.

He’s one of tens of thousands of cats born feral in the Denver metro area and the only known survivor of a litter born to a cat called Socks – the focus of the Twitter account Coors Field Cat.

RELATED: A cat stole the show at Friday’s Rockies game

Junior is now a year old, with tuxedo markings and a love for treats, and he’s ready for adoption to the right person.

“People get excited because it’s Junior. It’s a Coors Field cat,” said Jenni Leigh, who fosters animals for the Animal Rescue of the Rockies. She worked to tame Junior for the past few months. “You’re going to have to earn his love. He’s going to take time to get to know you and trust you.”

That’s because Junior is older than the usual age at which feral cats can be tamed. After they reach 3 or 4 months old, kittens become too feral to successfully live a domestic life, Leigh said.

To get to this point, Junior got help from several humans who have cared for Denver’s outdoor cats for many years.

After the gray cat ran into the Rockies-Dodgers game a year ago, Leigh decided to try to get the Coors Field cats fixed – the term is TNR or trap-neuter-return.

She leads Animal Rescue of the Rockies’ TNR program, in which feral cats are fixed and receive vaccinations and medical care. After they’re released back where they were trapped, they can no longer breed and perpetuate the cycle of cats born outdoors.

RELATED: Q&A: What is TNR for cats and how does it work?

Sometime before last year’s All-Star Game in Denver, Leigh connected with two women who have been helping feed the ballpark cats for years, and they broke the news that Socks was pregnant.

“We couldn’t get her before she delivered, so she ended up having the babies,” Leigh said. “… We waited, hoping that she would bring the kittens to the feeding area, and she never did. Finally, we decided to trap her.”

That was last autumn. At the veterinary clinic, it was found that Socks had a mammary tumor – often fatal for cats, if found to be malignant. The veterinarian removed the tumor, and the waiting began.

“We went the extra mile, sent it [the tumor] off for biopsy,” Leigh said. “I had to hold her [Socks] in my cat room for two weeks while we waited for the results.”

Luckily for Socks, results showed the tumor was benign.

So Socks was released back at Coors Field. A couple of weeks later, when Socks visited the feeding area, she started bringing Junior with her.

“I had joked for a while that I wanted to adopt the Coors Field Cat,” said Shannon Hurd, a Rockies superfan who runs the popular Twitter account on the ballpark cats.

Junior was trapped and neutered in December. Even though he was 9 months old and likely too old to be tamed, Leigh thought it was worth a try. Hurd volunteered to take Junior, but he wasn’t a good fit for her household.

“He was so out of his element,” Hurd said. “The project was better suited for someone with more experience.”

That person with more experience turned out to be Leigh, who had a foster spot open up about a week later. She took Junior into her home. One day, she found him in her bathroom sink – “cats love sinks,” she said – and took a chance on petting him. Junior accepted her touch, and he made steady progress from there.

Video below: Jenni Leigh coaxes Junior out from under the couch with treats.

Junior was officially ready for adoption in mid-March. While a few people have expressed interest, the right adopter hasn’t come along quite yet.

“He’s totally adoptable right now, for the right person to come along and be willing to spend the time,” Leigh said. “Have patience. You earn his trust over time. He’ll reward that person a million times over because he’s just so precious.”

As for the other Coors Field cats, Leigh and Hurd said there aren’t many: Socks, a dark fluffy cat called Midnight (or sometimes Blackie) and the gray fluffy one.

When it happened, she said her reaction was something like, “How cool. Finally. I loved it.”

We are on pace for 81 cat appearances. pic.twitter.com/NM7VITZUdw

TV viewers watched workers carry the cat off the field. After that, the cat escaped and disappeared into the bowels of the ballpark. The tricky feline was spotted again around Coors Field a few months ago.

Surprise! Looks who’s back!!!! (Prepping for a 2022 field appearance most likely!) pic.twitter.com/G3f3SUe9NP

Socks and Junior are the only ballpark cats that Leigh and her colleagues have trapped and fixed so far. (Midnight was neutered years ago.) This reporter asked her if the gray cat was her “white whale.”

The gray cat lives in a different area of the ballpark from Socks and Midnight, and Leigh said she likely needs greater access to Coors Field to find and trap him.

Anyone who’s interested in adopting Junior can get more information here. Animal Rescue of the Rockies also has other animals up for adoption; find the list here.

Video below: Socks hangs out at Coors Field a couple days before the 2022 home opener.

The feral cats of Coors Field 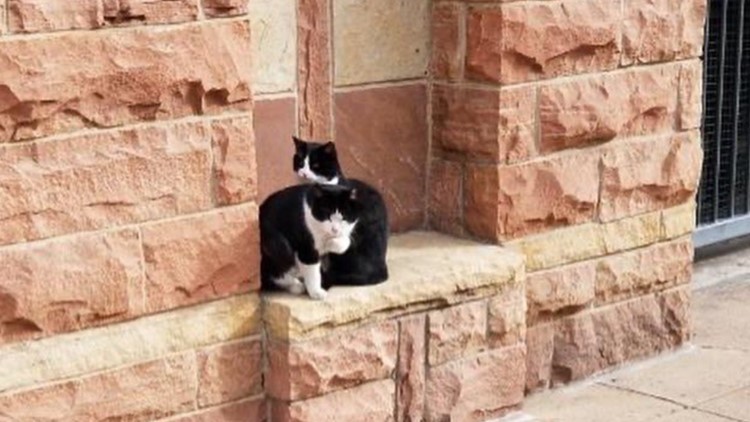 RELATED: Rockies home opener: everything you need to know

RELATED: Here are new foods to try at Coors Field this season

RELATED: Painting the town purple: Stripe is back on Blake Street ahead of Rockies home opener

> Do you have a news tip on this story or any other story? We want to hear from you! Tell us about it by emailing [email protected]