Phoenix Zoo gives special COVID vaccines to 75 animals including orangutans, fruit bats and big cats to prevent spread because creatures are being infected by visitors

By Stacy Liberatore For Dailymail.com and Afp

Veterinarians at the Phoenix Zoo in Arizona are giving the first dose of the coronavirus vaccine to 75 animals to stop the virus from spreading to the animals that come in close contact with visitors.

Big cats such as Sumatran tigers, jaguars and African lions; many of the zoo’s primates like Bornean orangutans and tiny emperor tamarins; and Egyptian fruit bats, armadillos and two-toed sloths are among the 75 animals that have already received their first shots.

The vaccine given to the animals is different from what is given to humans, as it targets the antigen of the spike proteins.

Many of the animals have been given a jab, but  big cats are being vaccinated from a distance with the use of darts.

Scroll down for video

Veterinarians at the Phoenix Zoo in Arizona are giving the first dose of the coronavirus vaccine to 75 animals to stop the virus from spreading to the animals that come in close contact with visitors. Pictured is a an Emperor tamarin, a small primate, getting its vaccine

Veterinarian Dr Gary West, the zoo’s senior vice president of animal health and living collections, said in a statement: ‘They take it way better than people do.

‘They don’t like it, but they bounce right back and go back to their lives.’

The vaccine being used at the Phoenix Zoo was developed specifically for animals by Zoetis, a global animal health company based in in New Jersey that donated the doses. The vaccine is authorized for emergency use to protect endangered species. 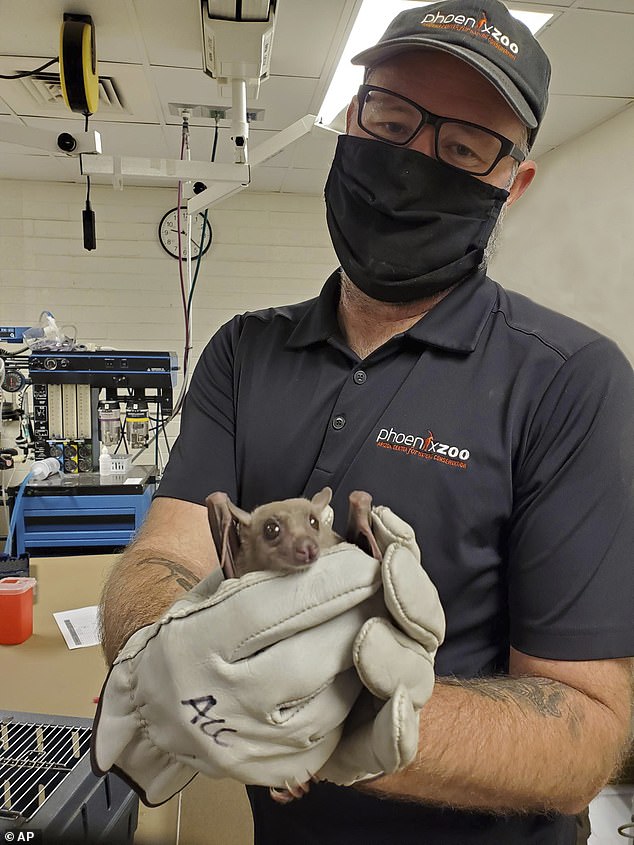 Big cats such as Sumatran tigers, jaguars and African lions; many of the zoo’s primates like Bornean orangutans and tiny emperor tamarins; and Egyptian fruit bats (pictured), armadillos and two-toed sloths are among the 75 animals that have already received their first shots

West said the Phoenix Zoo has been taking precautions to protect the animals throughout the pandemic with distancing and protective equipment.

The inoculations should give the most susceptible animals an added layer of protection, he said.

Zoos across the country, including at the St. Louis Zoo and the Denver Zoo, have recently grappled with COVID-19 outbreaks among their animals and zoos are now moving to vaccinate their animals.

In March, nine great apes at the San Diego Zoo became the first non-humans to receive a COVID-19 vaccine.

Four orangutans and five bonobos at the California zoo were given doses of an experimental coronavirus vaccine developed specifically for animals last month.

One of those orangutans, whose name is Karen, was the first in the world to undergo open-heart surgery back in 1994.

The vaccines, which are not designed for humans, were handed out after eight gorillas at the zoo tested positive for COVID-19 back in January after becoming infected by a zoo keeper.

Staff at the zoo were able to administer the shots after distracting the apes with treats.

However, not all zoo animals have been lucky enough, as three snow leopards at the Children’s Zoo in Lincoln, Nebraska died of the virus in November. 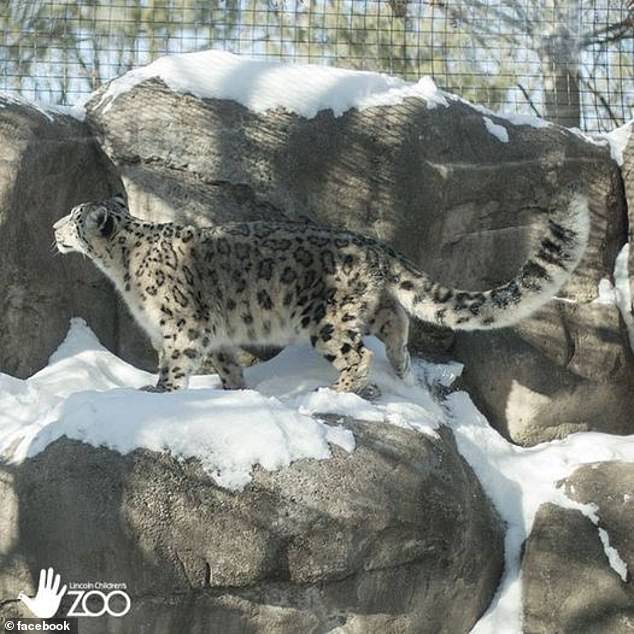 A trio of snow leopards at the Lincoln Children’s Zoo, in Nebraska, died from COVID-19 complications in November. Pictured is one of the leopards that died

The three leopards, named Ranney, Everest, and Makalu, contracted the virus in October.

The trio of snow leopards had nasal swabs and fecal samples taken after animal keepers had ‘observed symptoms consistent with the virus in felids,’ which can include difficulty breathing or shortness of breath.

The zoo said that the snow leopards and tigers were being treated ‘with steroids and antibiotics to prevent secondary infection,’ but it was not enough to save the majestic creatures.

Why You Require Pet Coverage Right before the Wintertime

4 days ago Mamie Grant
We use cookies on our website to give you the most relevant experience by remembering your preferences and repeat visits. By clicking “Accept All”, you consent to the use of ALL the cookies. However, you may visit "Cookie Settings" to provide a controlled consent.
Cookie SettingsAccept All
Manage consent