‘We sent him to his new home with an anger management referral’: Rooster Cluck Norris is adopted from North Carolina animal shelter after sheriff’s office begged someone to adopt the aggressive bird

By Ronny Reyes For Dailymail.Com

A rooster notorious for ‘bullying’ his caretakers at a North Carolina animal shelter has been adopted after a sheriff put out an adoption plea for the bird with the caveat that he ‘never come back.’

Video from the shelter shows the rooster, known as Cluck Norris, walking back and forth excitedly at the Union County Sheriff’s Office Animal Service division lobby as he waited for his new loving family on Thursday.

‘”Cluck” had a good run at the shelter and did his best to inspire chaos in spite of the love and care offered to him,’ the sheriff’s office said in a Facebook post.

‘Normally, adopted animals leave the shelter with immunization records and other animal care related items. In “Cluck’s” case, we sent him to his new home with an anger management referral, a self-help book, and an ankle monitor.’

Scroll down for video:

Cluck Norris, an energetic rooster with a love-hate relationship at the Union County Sheriff’s Office Animal Service in North Carolina was finally adopted after the office put out a comedic plea on social media that asked for the bird to ‘never be returned’ 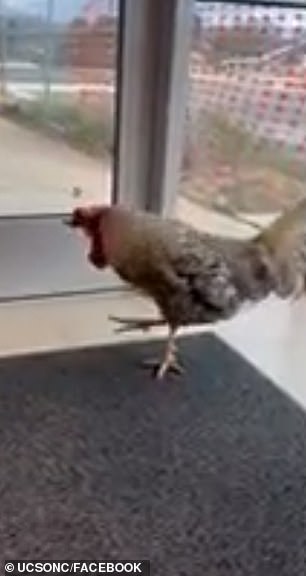 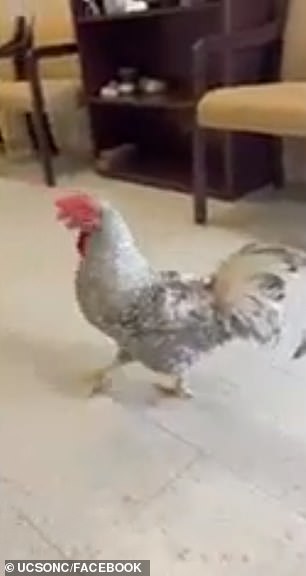 Cluck could be seen walking back and forth waiting for his new family. The sheriff’s office said the rooster was known to strut around ‘like he owns the place’ 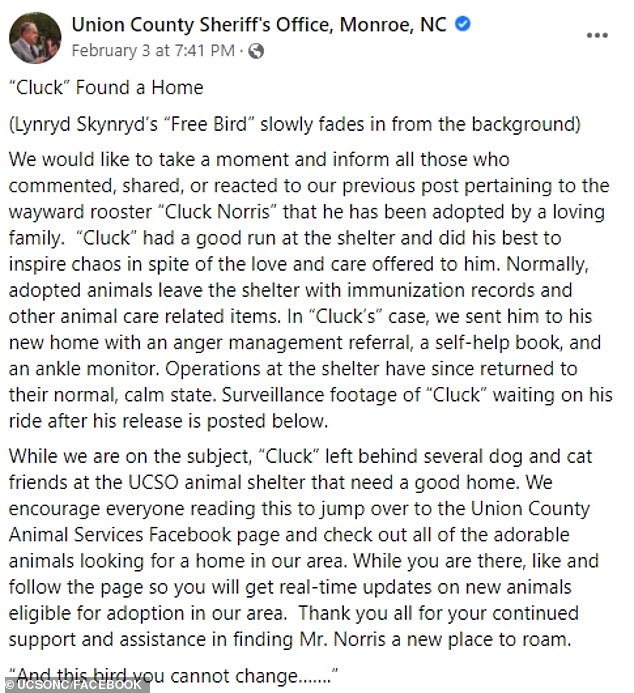 Cluck gained fame earlier this week when the sheriff’s office put out a plea for someone to adopt the hot-tempered rooster.

‘We are also receiving internal grievances from the other animals who are being woken up before the sunrise by “Cluck’s” incessant crowing.

‘This rooster was affectionately given his new name after he was placed in animal general population and immediately begin to establish his role as shelter kingpin. At this point, we have placed him in single-cell housing to prevent an animal uprising.’ 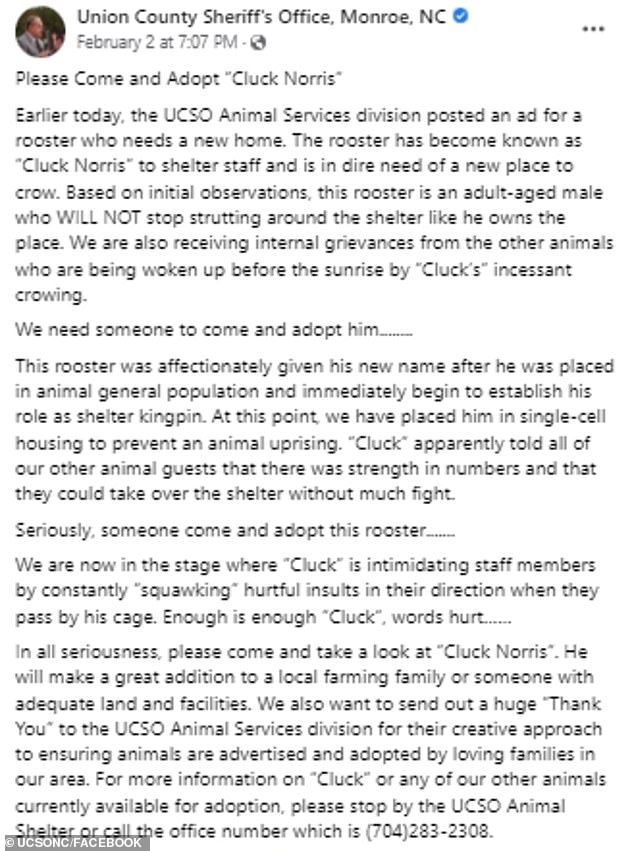 The post circulated on social media quickly, racking up hundreds of commenters showing their support for the ad and interest in taking in the Cluck.

One person on Facebook named Dave Pelletier wrote: ‘Deputize that flightless crime fighter and make him the mascot. And let crimals county wide know….You’re Fixin to get the Kickin’ Chicken.’

Another Facebook user named Robin Barbee wrote, ‘Look like a chicken fight is going to happen when all these people show up to pick up cluck.’

Krisi Katowitz, another Facebook user, wrote, ‘Normally I don’t like inmates, but this one is a fine looking fella.’

The sheriff’s office expressed their gratitude to those who helped find a new home for Cluck, as well as commended the Animal Services division for their creativity in advertising the rooster.

‘Thank you all for your continued support and assistance in finding Mr. Norris a new place to roam,’ the office wrote.